Cloud technology may seem new to most, but the world of technology is already undergoing a gargantuan shift from Mobile Cloud Technology to Mobile Edge Computing. It’s more important than ever that people in businesses that rely on technology understand what this shift means to them.

That’s why, through a series of three articles, we’re going to take you on a journey through Mobile Edge Technology to bring you up to speed with the ongoing transition so you can reap the early benefits.

In this first step of the journey, you’ll get a general overview of what Mobile Edge Computing (MEC) is, why it’s important, and why you need to prepare for it.

In the following two articles, you’ll discover real-time applications of the technology, how to deploy Mobile Edge Computing systems, and the relationship between MEC and Blockchain.

Understanding the steps towards the transition from Mobile Cloud Computing to Mobile Edge Computing.

Over the last two decades, we have witnessed the mobile smart device revolution. In all of our pockets we have powerful devices that let us communicate anywhere, anytime.

Most of these devices are more powerful than the giant supercomputers used by NASA and governments many decades ago. Nonetheless, with the increasing prevalence of new AI applications, the computational power required for our mobile devices is not yet future-ready.

Moving the computational task to cloud is more efficient as the cloud has more computational power than the mobile device. Since 2014, we have seen an explosive growth of mobile cloud apps developed and downloaded by users. These apps traverse an extensive array of fields from gaming and entertainment to e-commerce and education.

Although data-processing speeds have risen rapidly, the bandwidth of the networks that carry data to and from the cloud hasn't appreciated at the same pace. Mobile Cloud Computing is also hurt by the fact that the cloud is physically very far away from the mobile device. The latency of public cloud providers is over 100m/s which is particularly weak for modern latency-sensitive applications. 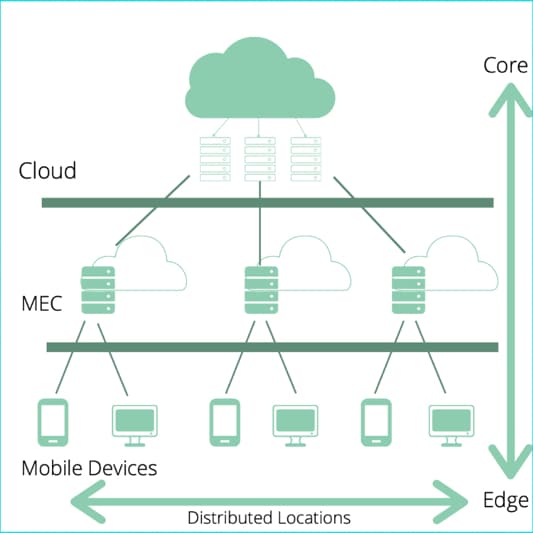 The latency drawbacks of cloud computing led to the creation of Mobile Edge Computing. MEC provides computing on the edge of the network as the diagram shows above.

MEC builds a hierarchy of decentralised data processing that reduces the distance data travels between the external device and the mobile device. The remarkable characteristics of edge computing are that it provides incredibly low-latency, reduces influx, and provides sufficiently high bandwidth to handle modern data-intensive applications.

Mobile devices can now place the workload for data-intensive tasks either locally, on the cloud, or on any edge node present in a network. What’s more, it is possible to split the task load into various components, each separately executed either locally or at a node depending on user choice.

In an edge computing networking, the edge nodes are loosely connected with each other in a heterogenous fashion. The connection ensures users of reliable computational capability whenever called upon. If one node is busy, it can pass on the task on to an available neighbouring node. Edge computing has the potential to address the concerns of response time requirement, battery life constraint, bandwidth cost saving, as well as data safety and privacy. Given such a workload, the network can become a bottleneck in cloud computing as, although the cloud has more computing capability, too many users accessing that power at once depreciates the power per user.

In terms of computation capacity, although the cloud has more, it is shared among several users at once, which means greater stress is placed on cloud capacity than on a node at the edge. Mobile Cloud Computing also requires that information pass through several networks, whereas with Mobile Edge Computing, communication constrained at the network edge is safe from that. That gives MEC the lowest end-to-end application latency.

MEC is better for saving power, too. Power saving for Internet of Things devices like smart TVs and wearable technology is a huge problem. With billions of devices offloading computation onto network edges, and less-than-excellent battery life in many devices, it would come in handy to save a little battery life. So, what does the future hold for MEC?

The three largest cloud service providers, Amazon, Google, and Microsoft have started working towards and investing in Mobile Edge Computing, which could well be vital in creating the smart cities of the future.

Microsoft recently acquired two Edge Computing Companies: Affirmed Networks, which makes vEPC platforms to support 5G deployments, and Metaswitch Networks, which makes a vIMS platform. Amazon Web Services are in partnership with Verizon who will use its Wavelength edge computing platform to power low-latency applications on its 5G network. And Google has created two Edge Computing platforms: Global Mobile Edge Cloud, an open cloud platform that gives network operators a way to develop applications with a distributed edge, and Anthos which is a cloud-native application intended for telecom companies to run applications at the network edge. These are serious investments in a serious growth industry.

But before we get there, there are many steps to take, each of which could help you in your business. In the next article you’ll discover real-time applications of MEC that are already well underway including how it’s being used to help traffic cameras reduce road traffic fatalities; how enterprises are using MEC to solve data and privacy issues; how MEC is enabling the autonomous vehicle revolution, and more. So, keep an eye out for that article coming soon.